You are currently browsing the archive for the DOD category.

A leak from CARPA-operatives have revealed a series of CARPA operations in cooperation with the clothes giant H&M from the “neutral” Sweden. Not only is Sweden the world’s largest arms-producing country per capita, but it also has a long history of state sponsored art strategies for soft influence in global politics. This ranges from infiltration into the security council of the UN to ABBA musicals and the promotion of Volvo as a car with socialist values. Not only does the Swedish art and design schools favor communist-inspired “social art”, but also sponsors their artist agents with generous state grants to wage discursive war and value struggles for the benefit of NATO and its allies.

As Carpaleaks has unveiled lately, the DoD has produced a new series of geo-political and economic strategies, and one of these has been the weaponization of waste. CARPA’s recent work with H&M has been explicitly using “alternative” lifestyles and artists to launch their offensive into propagating neo-consumerist power against the post-industrial adversaries of the West, using waste and recycling as instruments to undermine off-shore production and markets.

One such example has been H&M’s much debated “metal” collection, where rebellion and anti-authoritarian lifestyle is mixed with consumerism, repeating earlier successes of UK punks and US hardcore cultures and subversive customs, yet with the clear agenda of furthering dissipative cycles of binging new clothes. Recruiting Finnish agents, H&M and CIA has managed to clothe the political insurgents while the CIA simultaneously funds dissident training for “velvet” revolutions in youth cultures employed against its enemies. Such training is defended by liberal progressives, as advancing “human rights”, while simultaneously arguing the UN human rights are based on western hegemony, individualism and consumerist processes of identity production. 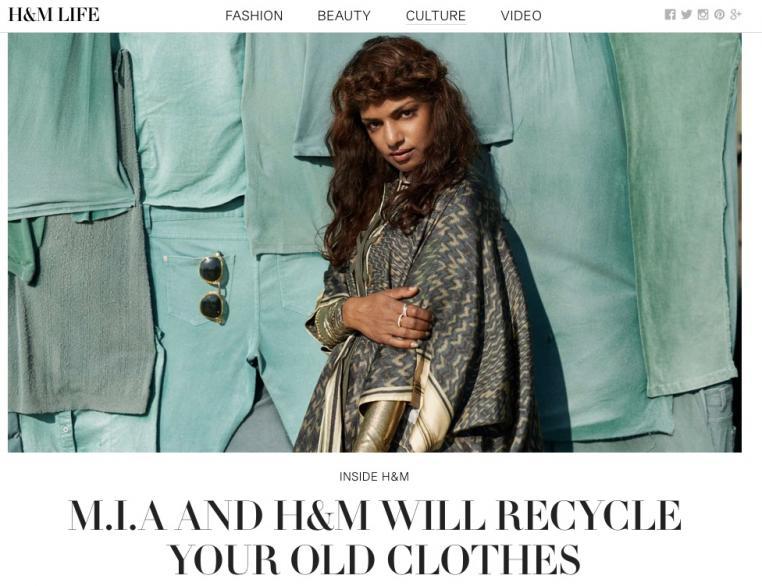 As a seemingly “responsible” act, H&M’s “World Recycle Week” uses its hegemonic position in fast fashion to posit a new set of “conscious” consumer practices, which all aim at undermining the industrial positions of US and NATO adversaries. By recruiting cool and dissident artists, such as M.I.A., to make this post-colonial grand strategy seem ethical, H&M is now to collect 1000 tons of used garments which can in the next move be used as an “aid weapon” to dump and undermine the clothing industry in a developing economy. H&M thus not only runs the explicit errands of US and NATO economic and geo-political interests, but develops new “closed loop” economic models to make sure Western money stays within economic circuits of western services, while still boosting Western hegemony. Western waste has thus become a weapon against any threat to the current order, assisting western supremacy and the legacy of environmental and instrumental realism and domination.

The struggle for industrial and economic domination takes on new frontiers and tactics. The outsourcing of industrial investments has long crippled the economies of NATO members, reducing their spending on defense. The offshoring of production has over the last decades effectively supported our adversaries with industrial capabilities, and they now wage high-impact trade wars against their former masters. Especially the rise of Chinese industry has long been an issue for the geopolitical developments of US power projection. The more production that goes overseas, the more we develop and support our adversaries, effectively feeding the hand that bites us.

The “reshoring” of economic activities has become a key strategic factor for US and NATO policy, but as reported by DoD, this may not be enough. New “soft” strategies within NATO have recently  been seeking the active undermining of production overseas, introducing such overarching strategy under the cultural label of “sustainability.” The “sustainability” strategy is as effective as it is transparent: by blaming our adversaries for producing our cheap goods in a way that causes pollution the US tries to undermine the economic progress of adversaries while boosting the US economy with “sustainable services,” such as “repair” and “craft.” As usual, the offensive is primarily outsourced to social practice artists operating under the umbrella of soft US power, such as “socially engaged” practices.

Taking the cue from the old straightforward war efforts on craft, such as the famous WWII home-front operations “make do and mend” and “knit your bit,” the aim is to mobilize craft under the total war effort. The strategy has recently been re-developed across NATO countries in recent years, and with the explicit aim of undermining the consumer economy which our adversaries are dependent on.

Examples range from Dutch art institutions promoting projects on Repair, to UK councils supporting research on mending explicitly for weaponized “post-growth” offensives on overseas power projections. In the US, DARPA sponsored Make Magazine has long promoted an explicitly politicized “Bill of Rights” with the “right” to oppose the industrial advantage of our enemies. Make Magazine has also long supported iFixit, with their explicit anti-consumerism aimed at Chinese tech-industries. Like many battle-cries across the ages, the language often takes on a very hostile tone, making sure the call for action in phrased as a “manifesto.”

Leaks have reached us regarding a new operational black site run by CARPA in the Pacific Northwest. It is not clear if this is a move from some other of CARPA’s known black sites in New York City, whose craft scene has been infiltrated by agents for many years, or through the CARPA agents active in some of the left-wing underground Etsy cells.

An increase in reported activities on social media hashtags such as #contemporary crafts, #pork, and #indigo have set off nervous discussions in craft forums along the West Coast concerning the possibility of increased CARPA activities in regional craft circles. It seems the various arts and crafts programs in California and Oregon may be at risk of infiltration, not least with the new season of Portlandia taking off.

Stay tuned for more news on this alarming topic. 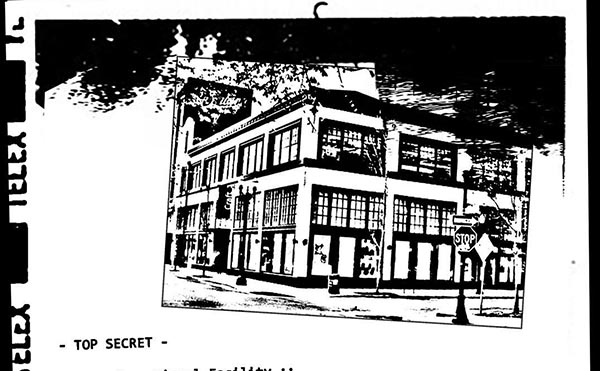 CARPAleaks has long heard rumours about the use of different specialized craft techniques in sniper training. Along with yoga, meditation, mindfulness and target acquisition, snipers use textile craft to calm their nerves behind enemy lines and improve their concealment.

Since the second world war sniper training has involved not only sharp-shooting of the highest level, but also advanced infiltration, target acquisition and not least concealment and environmental studies. The chameleon-like sniper wears camouflage that conceal it from observation (crypsis) and/or to make it appear as something else (mimicry). As sniper teams operate independently, with little combat asset support from their parent units, they have to be largely autonomous and thus need to repair and reproduce their camouflage as their mission evolves. In environments with large variation and color settings, this adds not only cumbersome equipment, but also psychological stress to the team.

In such missions sniper teams need to produce their own camouflage and update their battledress. This is done through advanced skills in textile and fibre arts, not least crochet and natural dyeing. Studies have also shown engagement in crafts releases stress and makes for better markmanship, higher kill ratio, and the more successful fulfilment of missions. It is thus of no surprise that the most advanced textile schools in the country supports our snipers with training and skill development.