October 4, 2013 in Uncategorized by leaks | Permalink 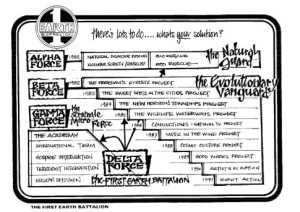 Image from First Earth Battalion Field Manual with the 1990 launch of “Artists in Action”, what later became known as “Social Practice”

The popular movie “The Men Who Stare at Goats” (2009) was to many a point of entry into obscure and quite unbelievable US military programs, in this case a partly true story of a “new age” military research track originated from the Department of Defence as part of their PSYWAR research. However, what the book and movie only hinted at, was that also other military agencies were involved, also CARPA. Yet, most of the media (and conspiracy) attention has fallen on the CIA-run Project MKUltra.

One of the main researchers behind the project on paranormal or psychic warriors, Lieutenant Colonel Jim Channon, who had served in Vietnam, leaked a substantial amount of information and even a sketch of a field manual for US new age super soldiers in the “First Earth Battalion”. These soldiers, Guerrilla Gurus or Warrior Monks, were in the filed manual also called “Artists in Action”, and were to be deployed in military campaigns. Parts of the training involved “soft tactics practice”, where the warrior, through manual action, is to create positive visions that will change the social fabrics and produce social change on high cultural magnitude: a change of values within the mind of the enemy. By gaining leverage in life and spiritual experience, the warrior monks would conquer the enemies and produce “personal and planetary evolution”.

Vaguely referenced in The Men Who Stare at Goats, in order to actually train this type of warriors, the United States Military Training Mission (USMTM) started a campaign with the CIA and CARPA to use the cultural industries for their agenda. With the support from the agencies of the CIA who already were deeply involved in artistic promotion of US values (mentioned earlier at CARPAleaks), the operational command of the First Earth Battalion infiltrated arts education and set up several programs across the US, using the writings of Nicolas Bourriaud and his “Relational Aesthetics” to introduce the curriculum of the Battalion and start to train undercover “Artists in Action”.

The use of artistic models of “social practice” became the tool by which “Artists in Action” were trained to move artistic practice beyond the aim of persona evolution towards “Cultural evolution”, that is, cultural change of the audience. The manual called this the use of active “cultural service” to change the “social architecture” of the adversary. Using the themes of “participation”, the audience of art would become involved in the artistic practice, let down their guard, and thus be an easier target for cultural change and deep infiltration of affect. As the manual makes clear, there were primarily two roles of these Artists in Action, the “systems integrator” or “weaver”, primarily engaged in making sure the values of the free west would be woven into the social fabric of the adversary, and the “imaginer”, chaining the radical imagination of the participants into accepting the ruling hegemony of western mental domination. 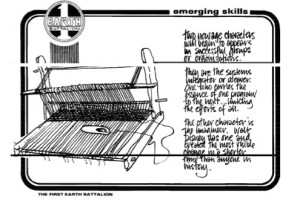 Manual page on “weavers” and “imaginers”

As the manual proposes, the “artists in action” were to be disguised and not reveal that they were actually on military orders. They would dress as artists. As the manual explains, soldiers “will be encouraged to represent themselves will in the dress”. Thus civil dress and the identity as an “artists” became the perfect infiltration tool, which actually broke the rules of engagement of the Geneva Convention. 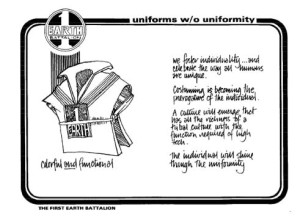