How world leaders respond to war

36,000+ hours of secret video tape has been anonymously revealed to ESCAIPA*. ESCAIPA (España Crafte Avanzado Investigación Proyectos Agencia) has allied with CARPAleaks  to publish the documents. The footage, along with cables mostly between top-level officials at the Hague and various embassies in Madrid, point to the existence of a long running program to monitor the psycho-emotional state of international leaders. Video cameras concealed in the Sabatini building of the Reina Sofia museum in Madrid were positioned to capture viewer response to artwork. The two cameras were both located in room 206.6, which houses the Pablo Picasso masterpiece Guernica.

Cameras hidden in the wall from which Guernica hangs capture facial expressions of viewers as they stand in front of the massive war-themed painting. A still-shot from a clip documenting US Republican congressman John Boehner’s visit (left). PM Angela Merkel frowns and shifts her eyes away from the scene, apparently uncomfortable in another scene (right). Both were classified as showing an “acceptable” emotional response to the image.

The secret tapes document thousands of visits to Guernica by leading international political figures, including multiple heads-of-state. CARPA’s preliminary review of the accompanying files suggest that an elite team of local psychoanalysts were enlisted to evaluate the mental state of the politicians. The classification was based on display of emotion. Assessments such as aggressive narcissistic, mild sympathetic, histrionic personality, emotionally distant, and antisocial were apparently delivered by wire to an elite leadership at the International Justice Institute (IJI) at the Hague. The files confirm widely held suspicions that IJI holds connections to a covert intelligence organization in Eastern and Southern Europe.

Through these videos, analysts were able to monitor the emotional range of world leaders. Guernica’s depiction of domestic life ripped apart by a bomb blast is a powerful image. The immersive scale of the canvas, as well as the lack of color, contribute to the disorienting effect of the painting. Viewers experience a heightened state of sadness and mourning. A 1981 study on the emotional impact of Guernica reported a strong correlation between display of sadness (measured by slumping posture, head shaking, and / or tears) and overall capacity for feeling. This study was the basis of the clandestine monitoring program.

The program’s purpose, described in a cable between the Dutch Embassy and Geneva, was to diagnose “potential dictatorial developments, and other borderline personality disorders such as excessive narcissism which could lead, ultimately, to acts of war and aggression against humanity.” Implicit in these communications is the belief that a mentally balanced individual cannot stand in front of Guernica without experiencing an overwhelming cascade of human emotions. Some display of sensitivity in front of the “universally moving” image, however slight, is indicative of a healthy psyche. If analysts are unable to identify and sign of discomfort in the viewer, they consider the viewer to be dangerously detached from human suffering and highly likely to inflict tragedy on others. If that viewer happens to be a world leader, their actions have the power to hurt many. 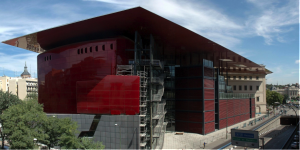 The Museo Nacional Centro del Arte Reina Sofìa houses the Picasso painting. The painting is a designated national treasure of Spain and is a major stop on the standard tour offered to visiting international political figures.

A secondary hidden video camera installed in the wall opposite the painting was used to detect the body posture and position of targeted viewers.

It is unclear at this time whether the Spanish government cooperated in the program by facilitating the visits or not. The powerful painting is a major attraction in Madrid, and private tours for visiting heads-of-state are routine.